First off, Sendtember is nearly over and Rocktobers is right around the corner so what the hell are you doing wasting your time reading this shit? Let’s face it, I’m no Arno Ilgner with secrets of how to samurai your way to the top of your proj. As a penalty for wasting your time reading this and not climbing get your ass off the chair, couch, or rust colored momentum harness and a bust out five negatives! Here in the ol’ SLC temps are finally dropping and psych is on the rise. But, we all know from readying my summer posts that I don’t actually climb in SLC. Over Labor Day weekend I headed back to the great north for to sample . . . (you guessed it) the chossiest Gniess this side of barely being climbable. I had some pretty hi hopes for this trip: Send all the projects I’ve been working on in the Canyon for oh, maybe the last five years The Fugitive, Songline, and Peaterbuilts. After the dust settled I managed to bag none of those goals. However, I did manage to have a blast, take some whippers, and get on one of the better routes I’ve attempted in the Canyon. On a side note, but staying in the spirit of love for the Gallatin, I recently had the honor of writing some nonsensical blathering about this special place for the Black Diamond website.


Saturday, after warming up on the south side of Skyline, we made the scramble over to the northern aspect. Next to the piece de resistance of the canyon (Fruh-Lowe) is a stellar gally crack leading to 5-6 lonely bolts. Strenuous yet controllable movement through the initial crack guarded the first bolt at a decent rest. Saddle em’ tight cause its gonna be a wild ride through perfect edges with no rest in sight. And that last bolt protecting the hardest moves of the climb, don’t even bother trying to clip er’ until the funs over. For the mere mortals in the group, I’d make sure to check your safety before embarking into this terrain as the consequence of failure lands you some 15 feet below your high point. Perhaps the most classic moment of the weekend was watching Tate “Ninja Dick” Shepherd remove the quick draw from his harness, grip the draw between his teeth, climb into the crux, and desperately attempt to clip the bolt as if he were swinging a hammer at it. To no avail, the result was a hysterical sight of taking the whipper (draw in hand) after no less than 5-10 vicious hammering motions of quick draw to bolt.

Sunday, back in full force with the fun-o-meter set to send. After warming up on the climb, which after my first trip up it, had me swearing to never return (Mother’s Day) it was as they ON. The Fugitive loomed above me, seeing straight through my external shell of man. Instantaneously, I was turned inside out, reduced to a heap of self doubt. With some solid encouragement from good friends, I pushed my angst to furthest corner of my mind like the box of yearbooks we all have tucked away. After nearly two seasons of attempts, the lower half of the route is more or less a series of memorized movements, punctuated by the occasional placement. The real difficulties don’t kick in until the second and final crux of the route. A finger lock rest just prior to launching upward into the difficulties allows the placement of a small nut. In previous attempts on the route this nut had been fixed for several years. However, repeated failures of potential suitors rendered said nut unusable and justified the nuts removal. Placing my own nut in the quarter inch crack, knowing a fall would permanently add the small amalgamation of brass to The Fugitive, gave comfort to the thought of failure. Due to the insanely hot climate of SLC, I’ve been spending more time in the climbing gym this summer than any respectable climber would ever be pleased to admit. Despite my frustrations on prolonged regarding prolonged plastic pulling, the singular benefit of these extended gym sessions has been a noticeable increase in finger strength. Therefore, latching the crux crimp (no larger than the width of several credit cards) felt some degree of solid. Already updating my 8a.nu card in my head, after sticking the next move, the send train derailed in a fashion consistent with the dream of a young boy placing coins on the train tracks. Desperately searching for some semblance of a foot hold to stabilize myself, my grip relaxed and I launched into the air. The reassuring transition between acceleration and deceleration resulting from the arrest of your fall was brusquely interrupted and replaced by terror. The next few micro seconds of my life are a mix of adrenaline and fear twisted into a climber’s sick nightmare. By the time it was over, two quickdraws lay against my harness bull horn, one attached to a nut and one attached to nothing. The first a result of the small nut placed below the crux ripping and the other from the crux nut placement cable exploding. To this day, I don’t know why the nut failed. A 7kN (1570 lbf) piece breaking during use is a terrifying thought . . .  theoretically that piece should have been able to statically hold a small car. Instead, it now hangs in my living room as a reminder. A reminder to what I’m not sure. I could try to come up with some metaphorical nonsense “a reminder of the frailty of life and your gear” or connect the experience to some life altering regime it has come to usher into my life. In all reality I say fuck it . . . YOLO bitches . . . you don’t buy gear so it can look shiny on the wall in home. 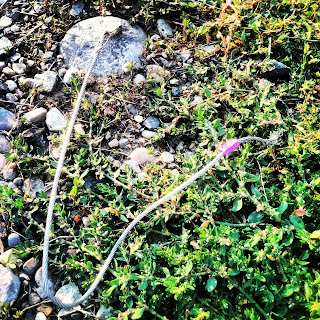 k-bone
I love to climb, everything.

Substribe To A Vertical Life, In A Horizontal World